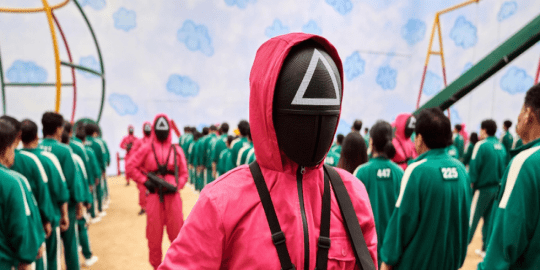 In Squid Game, 456 indebted prisoners play children’s games at the risk of death. It debuted in September 2021 and easily became Netflix’s biggest launch ever. Viewers came to love the characters, the violence and the societal themes that the show provided – often times thinking “would I do this?”. With Squid Game: The Challenge, the opportunity is just there.

The new reality competition will see 456 competitors compete in the games central to the South Korean series. Netflix has also promised new surprises too. Thankfully, the death element of the series is omitted. The winner, however, will be taking home $4.56 million as a prize.

Recruitment for the first round of Squid Game: The Challenge is now open, with players able to sign up for a chance to play the game at SquidGameCasting.com. The announcement says that the “Front Man” is looking for English-language speakers from any part of the world to participate. The reality show will be filmed in the UK.

This announcement comes just a few days after Netflix officially renewed the series for a second season with writer-director Hwang Dong-hyuk on board.