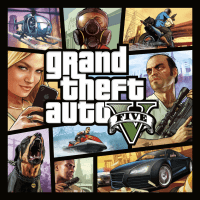 Grand Theft Auto V is an action-adventure game played from either a first-person or third-person perspective. It is the fifteenth main installment in the Grand Theft Auto series. Set within the fictional state of San Andreas, based in Southern California, the single-player story follows three criminals—Michael De Santa, Franklin Clinton, and Trevor Philips—and their efforts to commit heists while under pressure from a government agency. The open-world design lets players freely roam San Andreas, which includes open countryside and the fictional city of Los Santos, based on Los Angeles.

The game is played from either a first-person or third-person perspective and its world is navigated on foot or by vehicle. Players control the three lead protagonists throughout single-player and switch between them both during and outside of missions. The game also features a separate online multiplayer mode called Grand Theft Auto Online.

Grand Theft Auto V's gameplay is similar to that of Grand Theft Auto IV, but with a more refined and polished feel. The game features a variety of new and returning features, such as an extensive single-player campaign, a fully featured online multiplayer mode, and a brand new first-person mode.

The game's controls have been rebalanced and improved from Grand Theft Auto IV, and the game now features a new cover system. The game also features an improved AI system, which gives NPCs the ability to react and respond to the player's actions in a more realistic way.

The game's driving mechanics have been overhauled and are now more realistic than ever before. The game also features a new flight school, which allows players to learn how to fly planes and helicopters.

Grand Theft Auto V has a high replay value due to its massive open world, its wealth of activities and side missions, and its online multiplayer mode. The game's online multiplayer mode features a variety of game types, including team deathmatch, races, and capture the flag. The game also features a robust character customization system, which allows players to create and customize their own avatars.

Grand Theft Auto V is a massive and ambitious game that sets a new standard for open-world games. The game's vast and detailed open world, its refined and polished gameplay, and its wealth of activities and side missions make it a game that can be enjoyed for hundreds of hours. The game's online multiplayer mode is also a great addition that adds even more value to the game.